A piece for baritone and string quartet can, legitimately, be nothing more—or nothing less—than a song group, or cycle, with the strings standing in for the more usual piano.  But if you're awarded the privilege of making music for a singing actor of the caliber of Thomas Hampson, and for young musicians of the caliber of the Jupiters, you want—well, I wanted— to compose a piece that's both a substantial monologue and a structurally rewarding string quartet at the same time.   Billy Collins' pellucid Aristotle made that possible.  His poem is built in three long but continuous sections, each spinning numerous, surprising variations on some necessary (to the philosopher) element of drama—beginning, middle, end.  The range of Collins's images nudged the string writing into new (for me) colors and registers while demanding each movement retain its own character. However, while Collins's language was minutely expressive of his narrator's observations, it remained reticent about his emotions.  How does the singer experience, rather than merely list,  "the letter A... the song of betrayal, salted with revenge...the hat on a peg, and, outside the cabin, falling leaves?" The poem doesn't tell you, so the vocal line must: which made the baritone's music needful, urgent, dramatic rather than merely decorative.  Aristotle the poem is about drama.  As well as a tribute to the artistry of its performers, I intend Aristotle the score as a drama itself.

A finely crafted song can take listeners on an intimate journey in which music and words are married, like slaves to the same master: storytelling. And sometimes words and music take two seemingly different paths — like two developing subplots — to reach the same end.

The latter was the paradigm at play in the premiere of Mark Adamo's bracing, but deeply lyrical, Aristotle, for Voice and String Quartet. That three-part song proved the highlight of baritone Thomas Hampson and the Jupiter String Quartet's appearance at the Mondavi Center for the Arts on Wednesday evening.

Adamo's music for Aristotle was married to Billy Collins' vividly impressionistic poem of the same name. It's easy to see why Adamo chose it for his musical inspiration. The 74-line poem nails the idea of how stories have a beginning, a middle, and an end. But make no mistake — the poem is far from a dry incantation of Aristotelian principles. Rather, it's an intimate and vivid skein of images akin to the mise-en-scène of an experimental film, albeit one that hews to tried-and-true dramatic structure.

Two forces were at play. In the first, violinists Nelson Lee and Meg Freivogel, with violist (and sister) Liz Freivogel and cellist Daniel McDonough, performed string music that was, at times, brooding, yet always hypnotically powerful.

Adamo's challenge in the song is taking Collins' poetic imagery ... and employing the right colors and textures to add an emotive spin.

And Adamo, who made his mark with the operas Little Women and Lysistrata, rose to the task of conveying Collins' poetry.

This was accomplished with a lyrical musical clarity in Aristotle. Economy of musical line helped Hampson traverse the three-part work as it moves from beginnings ("a woman ironing on a bare stage") to the middle ("the sticky part where the plot congeals") and on to its third-act conclusion ("St. Clement with an anchor around his neck").

Hampson's dusky baritone did not overpower, nor did he ever overplay his hand in the song's signature moments. If anything, he may have underplayed some of them.

The Jupiter Quartet proved a crucial partner in this storytelling equation — with tonal descents and subtle interludes between sections whose music was delivered with delicacy, though not a delicacy that made what they performed subservient to the vocal.

The work was a bracing affair that felt like the signature aria from an operatic work. It provokes the idea of whether such a song might be the seed of an opera — a self-reflexive one about storytelling, about beginnings, middles, and ends?

It's not every day that a work for baritone and string quartet gets written or commissioned. And all commissions serve to ask the question: "to what end?"

With Aristotle, Adamo makes the argument that pairing a baritone with a string quartet is a musical forum that needs more exploration. And if that exploration happens by combining the seignorial quality of a singer like Hampson with the fresh-faced power of musicians like the Jupiter ... well, then, all the better.

When I spoke with baritone Thomas Hampson last week, it was the day before his first read-through of "Aristotle," a setting of a Billy Collins poem for voice and string quartet by the American composer Mark Adamo. Hampson always looks forward to his first full encounter with a piece, the moment at which musicians bring it from the conceptual world into sound.

Adamo has "been extremely exact in his reading of some of the phrases, which I always find a wonderful conversation to have with a living composer," Hampson said from California, where the world premiere of "Aristotle" was to take place. "It's the conversation you imagine having with the great composers of the past." That process, of working through exactly how the text and music of a song interact, "is about finding the mutual understanding about what that part of that poem or libretto means. And that is always my favorite part of learning new pieces and working with composers."

"Aristotle" — which receives its local premiere on Friday at a Celebrity Series of Boston concert with the Jupiter String Quartet — represents another stage in Hampson's career-long engagement with song. Indeed, few living musicians have explored so widely or thought more deeply about the intricate craft of joining poetry and music — usually referred to as art song but which Hampson prefers to call classic song. He sees it not just as one niche in the music world but as an essential record of a civilization in time.

"If you accept the fact that words are somehow the symbols of people's thoughts and identifications of their lives, and that music can perhaps echo memories and associations more distant than any immediate reality — then in song you have one of the most amazing diaries of any generation's culture at a given time."

That impulse, to see song as one of our most telling cultural identifiers, helps to explain why Hampson, who sings plenty of standard song and operatic repertoire, is so firmly committed to new works: It's not about duty or even about expanding the repertoire; it's about helping us understand who and where we are.

"Aristotle" was commissioned by Music Accord, a consortium of American presenters that includes the Celebrity Series, for Hampson and the Jupiter. Hampson calls the choice of Adamo "a no-brainer" for the lyrical cast of his writing. At the initial discussions, the baritone referenced the influence his well-deserved reputation as a Mahler singer was having on recent commissions.

"At that point, I was impressed with everyone trying to out-Mahler Mahler. I guess they thought, 'Have Tom Hampson do something — put the word 'death' in it and he's yours.' "

Instead, Hampson told Adamo, "'I think what I'd like to find is something that has some humor and some grit and some relevance to today.' And at that conversation he said, 'Have you read much Billy Collins?' Obviously I knew who he was but I hadn't read much of his poetry."

"Aristotle," which Adamo suggested, is a meditation on life phases, written in language that's direct and specific yet has what Hampson calls "a kind of 500-foot level of looking at it."

"What I'm trying to say is that it's terribly clear, terribly obvious, in the best sense of the word," he continued. "It feels very much like words that I'm supposed to be saying in and of my own life's experience, even though there's a certain finality to the poem that I'm certainly not willing to go to. But someone reading or listening to the poem will get this idea of how time waves over us, rolls over us, and how life keeps getting more complex, more fascinating, and at a certain point you take a deep breath and start adding things up as you have accumulated them over the years."

The repertoire for voice and string quartet isn't large, and many would peg Samuel Barber's "Dover Beach" as a likely pairing. But Hampson and the Jupiter have opted instead for a selection of songs by Hugo Wolf, likely to be unknown territory to many listeners. Given that Wolf represents a culmination of 19th-century German song, "it's kind of shocking to me that Wolf lieder have become so rare again," Hampson said.

He added that this was not endemic to the United States. Hampson has planned a series of concerts with the Amsterdam Sinfonietta that includes some Wolf songs. "But I had to combine it with Schubert, because some of the presenters in Europe were going, 'If we have a big group of Wolf, we'll never sell a ticket.' It's astounding to me."

The Adamo piece is Hampson's second premiere so far this year. The first was a song cycle on Thomas Hardy poems by Michael Hersch, "quite a remarkable young composer with a completely different musical language." The Hardy texts, many of them somewhat fragmentary, dovetailed well with Hersch's "rather abstract tonal world that kind of drops the needle in certain imploding ways."

The goal, he went on, was not to look for the next masterpiece but to continue the process of self-reflection that each piece, each entry in our cultural diary, furthers.

"There's just way too much banal measurement of whether this or that new piece is successful, rather than embracing the process of finding our own musical language in any particular generation," he said. "I mean, you say 'new music,' and a lot of our public kind of sighs. Personally, I like expanding my ears and my horizons. It doesn't mean I have to walk out of everything I heard and go, wow, I want to listen to that every other day. That's not the point. The point is to innervate, if you will, your own life's perceptions of how we use words and how we appreciate sounds and how we use those two things to tell our story in our lives." 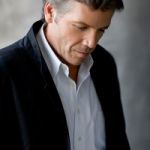