As I began writing this piece, I kept being drawn into a tune that has haunted me continuously for some time. Billy Strayhorn's "Lotus Blossom," with its poignant falling lines and close, sighing intervals, is a special shade of bittersweet. In this perfectly melancholy tune, a melodic sequence blooms into an expanded lament, only to rise hopefully and pleadingly during its bridge and then resolve resignedly downwards again. And its accompanying harmony, filled with suspended longing and tinged – like in most Strayhorn compositions – with regret, holds the secret to why Duke Ellington considered it "just about my favorite, possibly" of his close collaborator's output. "Lotus Blossom," at one point titled "All Roads Lead Back to You," became the starting point of this new piece, weaving its way in and out of the narrative. I reimagined it with more and more layers, complicating and implicating the harmony, and with ever more momentary suspensions and resolutions. As the piece grew to its final form, the reimagined tune became the through-line of the entire work, returning in increasingly distant transformations in between and throughout the main movements.

The piece opens with the piano's sustained notes guiding the strained melody, with outer voices both harmonizing and atomizing, and strings producing a hazy, suspended sheen. The quintet begins in earnest when the strings take over at what would be the bridge of the tune, pushing against the piano's responses. When the piano returns by itself in another lyrical episode, traces of the Strayhorn have morphed into something entirely different, but with the curves and outlines of its shadowy melodic profile still intact.

Following this brief interlude, the strings – now carrying the lyrical spirit forward – become the current against which the piano's active ornamentation once again resists. Finally, all instruments are united in Movement III, the resonances of the piano providing the anchor from which the strings issue streams of "quiet, buzzing intensity." This is followed by a free passacaglia, cycling through an expanding progression, around which torrents of rapid piano activity begin to accumulate; it ends with steely vertical sonorities that vaporize into ever-higher reaches.

A final interlude recalls the even more distant opening melody, now three times removed from the original, before the full ensemble launches into the fifth and final movement, which is also the longest and most expansive. Extroverted in rhythm and groove, it occasionally recalls the quiet, sighing music of earlier, only to revert to its propulsive engine and bring the piece to its charged conclusion. 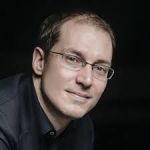